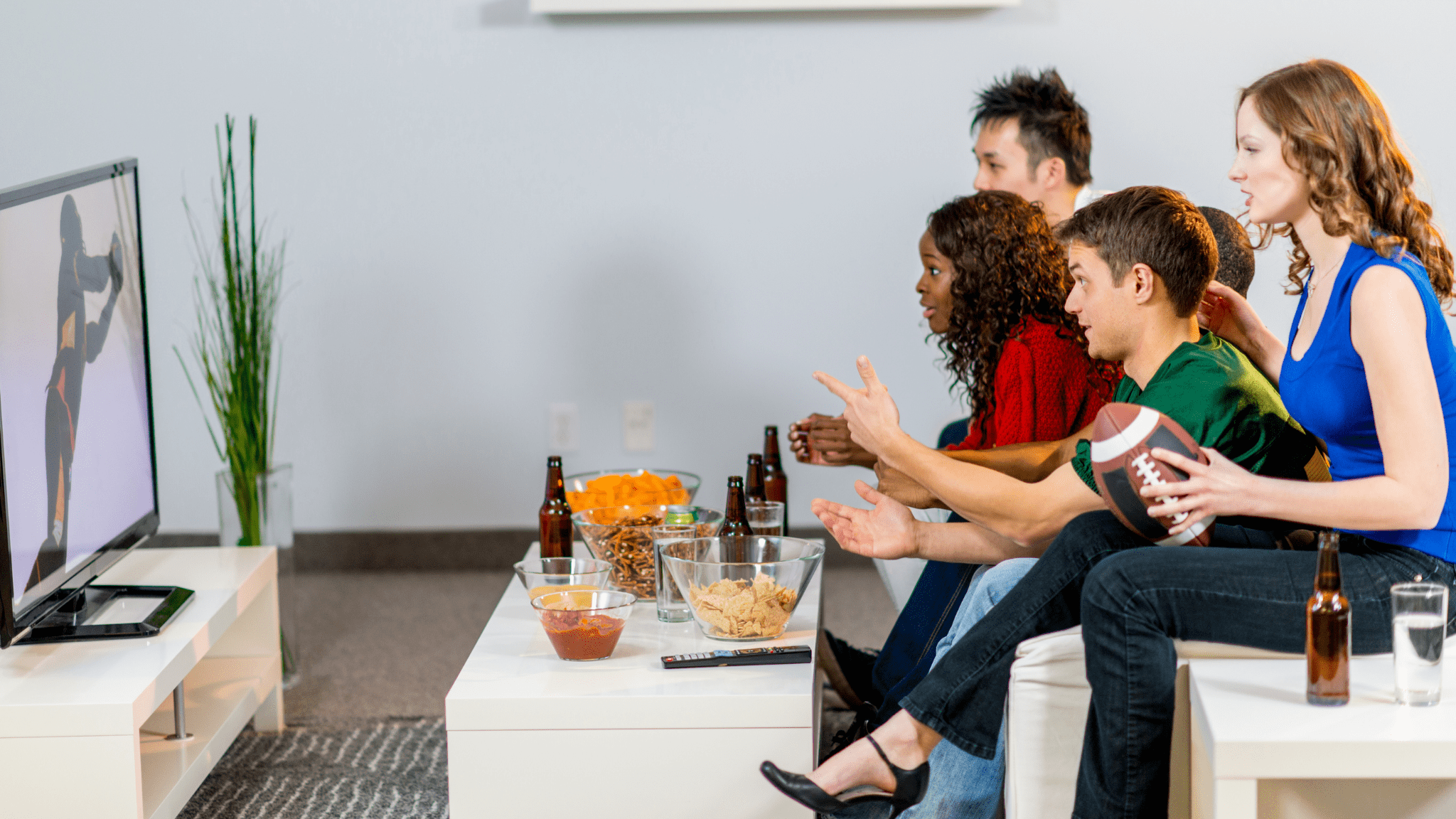 February 9, 2021: I don’t know if you heard, but the Super Bowl was last weekend. And yes, the whole GameStop situation is still going on. Oh, and Snapchat is alive and well! Don’t worry, we’ll tell you all that you need to know.

Which were our favorites? Thank you for asking! Here were some of our top picks:

Adam Levine setting up Gwen Stefani and Blake Shelton on a blind date is the kind of content you need to start your week. ICYMI, the version with Gronk and Tom Brady was pretty great, too bad it was banned.

This lighthearted approach highlighting the youngest viewers of the Super Bowl (aka babies born literally that morning) had us melting.

Mila Kunis, Ashton Kutcher and Shaggy giving us the mashup we didn’t know we needed.

Not only was this commercial a major tear jerker after the tough year we all had, but it also changed the life of TikTok creator Christian Shelton who had his debut role singing in a Super Bowl commercial.

With a 30-second ad costing roughly $5.5 million, it’s no surprise that each company pulled out all the stops. Agency creative directors and marketing departments at brands with SBLV ad spots all hoped to be the next viral sensation —and this was an especially tough year to produce a Super Bowl ad, with pandemic production challenges, a polarizing election year and a nation reckoning with racial injustice. We felt a lot were able to be successful (see above), while others perhaps not so much. All in all, it felt good to be able to enjoy the annual ritual of Super Bowl ad-watching and somewhat feel a sense of normalcy.

Last year the winning commercial was Jeep’s ‘Groundhog Day’ commercial. The 2021 winner is Rocket Mortgage with their two, 60-second “certain is better” commercials starring Tracy Morgan. These commercials claimed the two top spots, the first time this has happened since Budweiser won the honor 14 years ago.

Not Unrelated: GameStop, Reddit, and Robinhood Walk into a Bar

Reddit and Robinhood both aired Super Bowl commercials, and each evoked different reactions from viewers.

Where do we begin? Last week GameStop stock plummeted over 81%. As of last Friday, four movies and a tv show are in the works revolving around this ongoing story. Also, let’s not forget the wave of lawsuits coming at Robinhood.

And how are Super Bowl commercials involved?

If you blinked you might have missed Reddit’s 5-second ad (which cost them roughly $900k-950k). This ad (seen below) explained the power of a community rallying towards a common goal, in this case, fighting Wall Street. This ad didn’t seem to ruffle as many feathers as Robinhood’s commercial. The company’s first ever Super Bowl commercial, titled “we are all investors,” depicts a variety of people whose diversity intends to communicate how stock trading is meant for everyone and Robinhood makes that possible. Ironic, isn’t it? 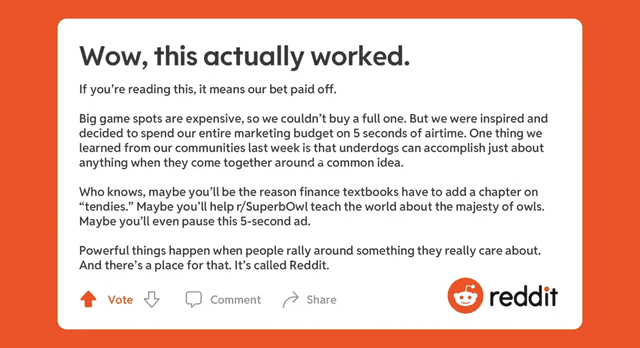 Many are outraged over Robinhood’s “tone deaf” commercial amidst the bad press they are currently involved with. Many argue it doesn’t make sense for the company to claim “we are all investors” right after it denied people the chance to invest. Ad Age tweeted, “Robinhood considered backing out of the #SuperBowl following the $GME stock controversy, but decided to stay in presumably after it saw the boost in users it got from the frenzy.” If they were already getting new members (amidst the lawsuits) why not play it safe?

In contrast, people seem to love Reddit’s witty commercial. Clearly inspired by recent events, they wanted their users to know that they have Reddit’s unwavering support. Five seconds was all they needed to get their point across (and get a ton of press coverage in the process). And paying for that Super Bowl ad wasn’t a problem because on Monday, Reddit announced they have raised $250 million in new funding.

Snapchats Q4 report posts a 62% Increase in revenue and 16 million new daily active users, taking it to a new high of 265 million DAU.

#TBT to Kylie Jenner single handedly plummeting Snapchat stock with one single tweet. It may have been a rocky road for Snapchat in the past years, but they seem to be doing okay. Compared to their Q4 in 2019, Snapchat has only seen a 6% increase in DAU in North America. It’s not huge, but it’s something. However, the majority of Snapchat’s revenue is still coming from North America with $659 million in Q4 alone.

Snapchat has put significant investment in their presence in the “rest of the world” by emphasizing local content, improving their language support, and a 2019 update that integrated Android users which helped boost their presence in India. As a result, Snapchat has seen a 55% increase in users from outside Europe and North America.

Snapchat is doing everything they can to stay relevant. They even just paid a high school senior a million dollars for utilizing the spotlight feature. They have long been at the forefront of innovation, whether that be through the invention of Snapchat stories, or introduction of lenses (aka filters). However, Facebook and Instagram will stop at nothing to reign supreme, basically taking these ideas and executing them better with a larger user base. However, Snapchat is still clearly plugging along.

With a 62% increase in revenue to $911 million YOY and strong advertising integration, don’t count out Snapchat just yet. Snapchat has a strong user base and software for influencer marketing. The market is still there and should be utilized if it makes sense for your brand’s audience.