You may have noticed an overwhelming number of dad jokes floating around the internet today. Or perhaps it’s the excessive pranks and PR stunts that have caught your eye. No, Google.com isn’t broken–it’s just April 1st, or better known as the unofficial holiday of the internet. In case you couldn’t take the lies and deceit anymore and decided to avoid all product announcements or news for the rest of the day, we’ve rounded up the best of the bunch for you (in no specific order).

As is tradition, Google kicked things off a tad early on Tuesday by setting Pac-Man loose into Google Maps. Simply click the blue and black square at the bottom of an open map to turn it into Pac-Man levels. For a challenge, give Boston’s infamously complicated streets a go:

Even scientists are joining in–scientists! Such reputable names as Ben Kenobi and Dave Vader provide their sentiments in a press release.

Branson paints Branson red (Virgin’s color) in an announcement that Virgin Group’s US and some of their UK operations will be moving to Branson, MO.

Amazon, in a #tbt eve celebration, brings back the 1999 version of their homepage.

In truly cutting edge fashion, Samsung announces a phone more functional than any other–so functional in fact that it can replace the cutlery in your kitchen. We’ve seen sharper jokes, but with every phone vying to become thinner than the next, Samsung makes the cut with this one.

Some people may have actually gotten excited at this announcement (we’ve witnessed the selfie stick sensation firsthand). Unfortunately or fortunately, the handcrafted item does not exist but the handcrafted backing on their phones do.

Recyclable underwear. We hope no one actually fell for this one.

8. Groupon let the cats out of the bag

Quite literally. Groupon announces the launch of their cat driver app. Looks like someone’s not shy about competing with Uber–ME-OW!

Google had more tricks up its sleeve than anyone else today, so we had to feature another one. Go check Chrome on your phone right now and participate in #ChromeSelfie.

10. Amazon makes a Dash for it

We may have 10 pranks featured on this list, or we may actually only have 9. Amazon is steadfastly denying its Dash button is a joke. But the timeliness of its announcement and the concept in itself is a little too absurd for us to all take it seriously. We’ll continue taking bets for this one. 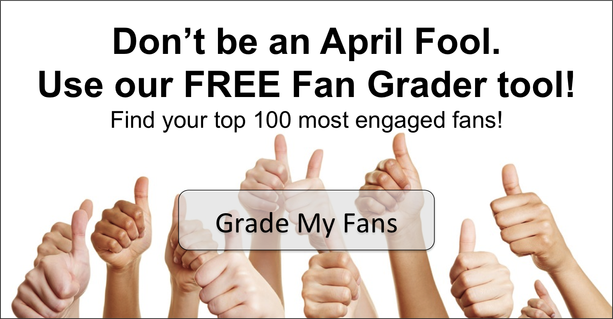